Spinner are targets on the playfield that spin when the ball hits them. They will slow the ball down slightly, but will not stop them.

The spinners are normally made from metal, to give them more mass. They can then easier create the force needed to actuate the switch multiple times.

The rotation detected with an contactless sensor. Because the sensor is contactless, the spinner can be lighter. The spinner will be made from plastic.

There are several options for the rotation sensor:

It would be nice if the sensor only detects when the spinner rotates at least 180 degree. Also a long pulse would be nice to not miss the pulse. The HALL sensor will likely only create a short pulse. The length of pulse by the optical sensor depends on the shape of the beam interrupter tab.

I choose a optical sensor in the form of an U shaped detector. It is interrupted with a half circle shaped tab mounted on the spinner.

The spinner need to be heaver on one side, so the spinner hangs almost vertical. The playfield is angled about 6 degree, so normally the spinner would be hanging this amount of square compared to the playfield. Due to the weight of the interrupter tab this compensates for the playfield angle. 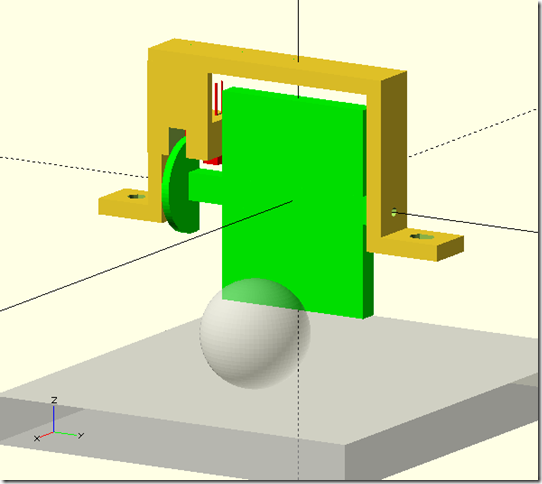 The front of the spinner. The axel is made with a 2mm stainless steel rod. This allows the spinner to rotate with very little resistance. The axel hole is printed and not drilled.  The steel rod is held in place by the 2 m4 screw nuts that hold the bracket in place.

The spinner is a bit longer on the lower side to keep it vertical in rest. 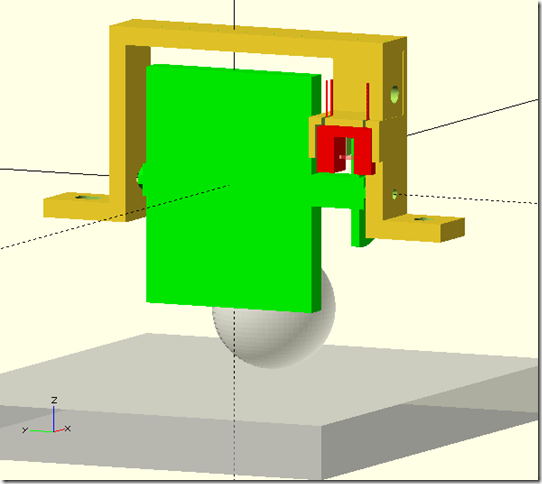 The rear of the spinner. The red part is the optical U shaped interrupter. It is hold in place using the wires of the sensor. The hole of the side of the spinner frame is for the sensor wire. 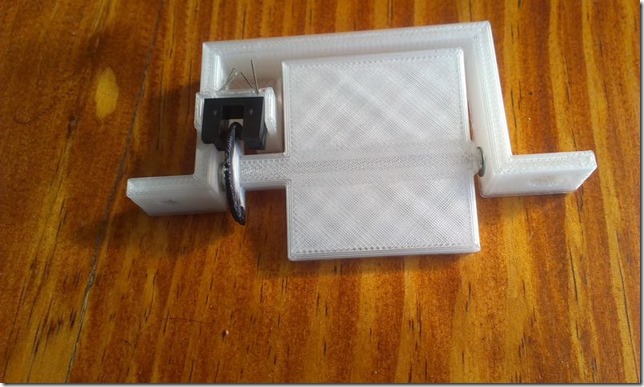 In the photo is the spinner upside down, and not in the rest position. This can be seen that the length of the spinner on top is longer then on bottom.

The plastic is transparent, and did not block the light to well. So the interrupter tab is painted black.

The spinner rotates quite a nice number of times after being hit with a pinball. The approach using a plastic spinner and contactless sensor works quite well.

The interrupter tab is printed as part of the spinner. Because it sticks up and is thus is printed on the the short side: this does create a much less strong version then when it is printed on the longer side. Alternate this could be split into two parts, and glued together.

There are several issues with the current design that can be improved in the next iteration:

So again back to the drawing board.