Also known as ball locks or saucers. These are parts of the playfield, where the ball falls in a hole. The ball stays there till the ball is pushed back up onto the playfield by a electro magnet. The electro magnet is under control of the computer, and will release the locked ball depending on certain game rules.

Some parts of the pinball machine all look the same , but  ball locks are present in several implementation styles. The end result is the same: some pin will push the ball out of the hole.

There is always  a ball detection switch present that informs the controller that a ball is present in the lock. The sensor is normally either a micro switch in newer games, or a leaf switch for the older ones.

The ball sensor is done with a contactless induction sensor. They are easier to use then micro switches. Micro switches always need some special formed metal wire or metal tab to detect the ball. A contactless sensor only need to be close to the ball, but only need a hole and something the clock the sensor nut against.

I tried out several styles of eject hole. They all share that they use a relative large hole in the playfield. The insert sticks completely through the playfield, and will protect the wood from damage. The plastic can get ball wear, but is easy swapped out.

I have designed several variants, but still not fully happy with the design, and they need more tuning. The types are:

The following sections show each of these designs.

Need to create some drawing pics. 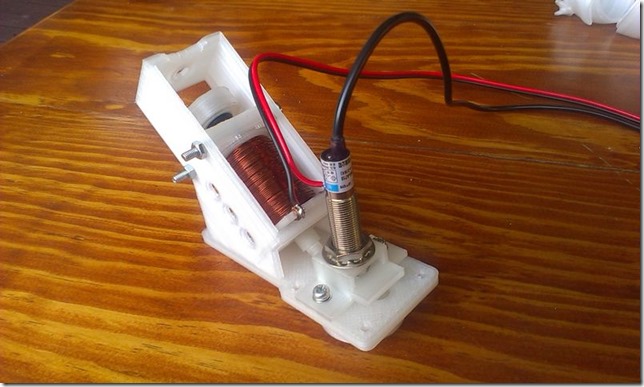 The complete ball eject viewed from the bottom. The contactless sensor is on the front in tis nut bracket.

The spring that returns the plunger back is missing in this picture. 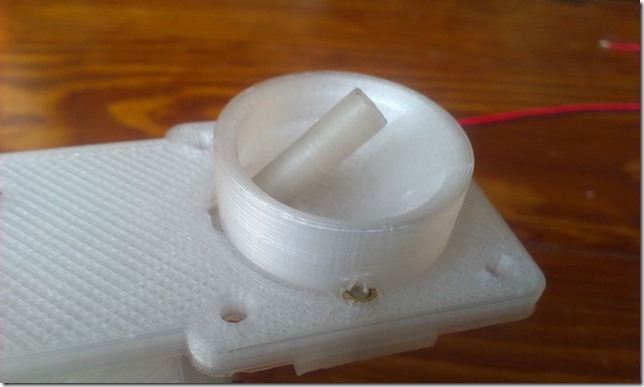 This shows the top of the eject in activated mode. The pin that pushes out the ball is fully extended. 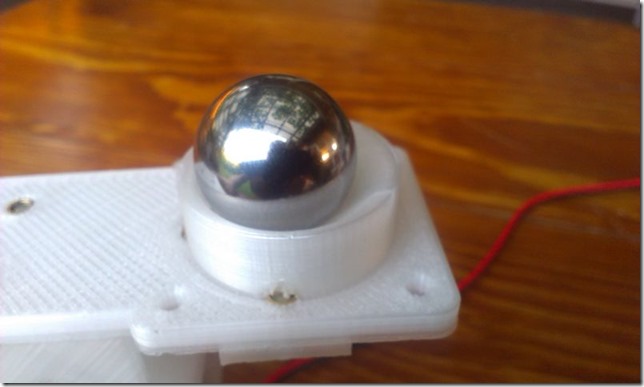 Eject shown with a pinball. The ball is located off center to allow a ramp back up the playfield. 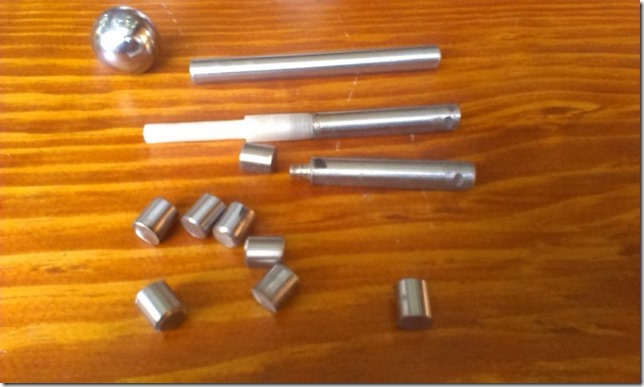 Here the metal parts that are needed for the eject.

From top to bottom:

Eval: this ball eject variant looks works very well. It uses only one moving part. The drawback is that it takes a lot of playfield area behind the eject hole. Depending on the playfield layout this space is not available in a lot of situations. In case of the Firepower, only the top ball eject can use this type of design.

This version the ball is pushed away with a pie of plastic angled 45 degree. The plunger is a bell type variant. To improve the easy movement, the purple part is printed in two parts, so that the printed layers are perpendicular to each other.

This type of design uses very little playfield area, but need a long vertical space below the playfield. 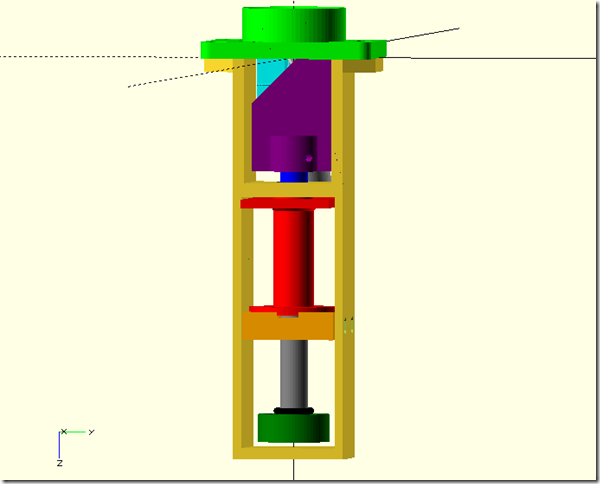 The design is shown in rest position. Not shown are the coil windings and the spring coil. Red is coil holder. green is plunger bell end stopper. Blue is the plastic part of the plunger.  green is the ball shield holding the ball, and protecting the playfield

Another view showing the sensor and shield. 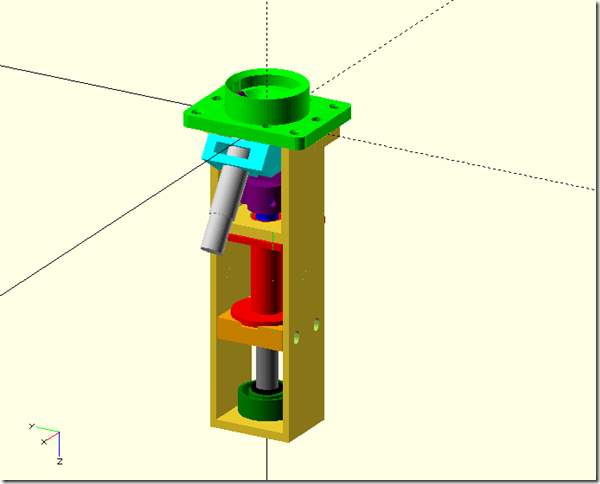 The part sticking out at a 45degree angle is the contactless sensor that detect the pinball. It is hold in place with the cyan sensor holder. 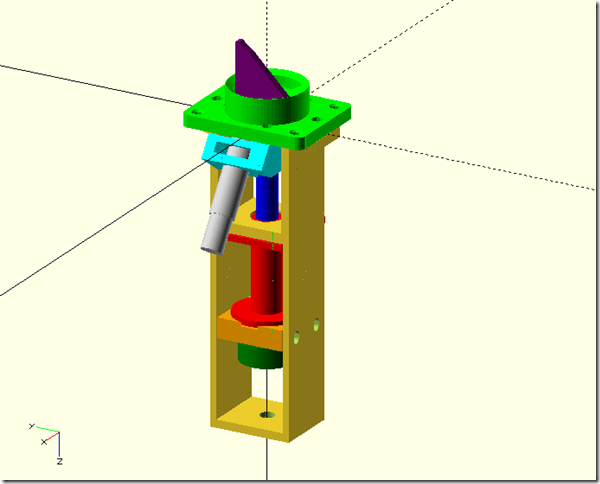 This a drawing of the coil in activated mode. The ball is pushed out on a 45 degree angle by the purple eject blade.

This design is not printed out yet, except for the ball shield and the eject part.

It looks to give the ball the correct direction.

Eval: Uses very little space of the playfield. the smallest of all designs. It looks like that ball eject direction is good. The sensor is close enough to detect the ball reliable.  After a redesign of the eject part, the shield and eject parts runs smooth along each other. It does not look to create problems when the eject part is pushed sideways during the ejecting. Biggest drawback is the length of the total construction, that need a lot of space below the playfield.

Possible options to reduce the space needed below the playfield:

This design uses a special shaped arm to push the ball away. It has a moon shaped hole on the end to avoid the use of an extra part of plastic, The plunger has direct contact with the arm. I hope the hole will not get too much wear by this construction.

Another thing that need to be tested weather the 4mm thick arm is strong enough to hold up with the force applied to it when ejecting the ball. 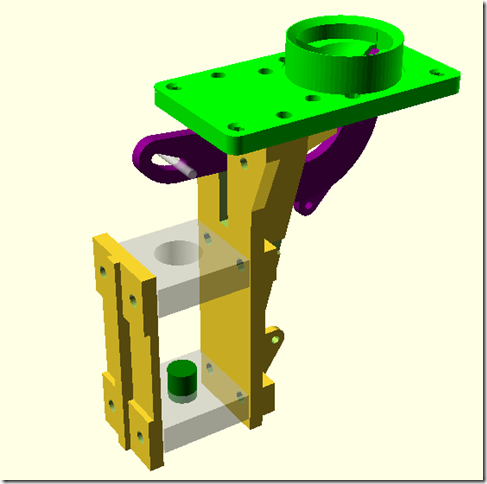 The coil and plunger are not shown for clarity. The light green part is the ball shield. The dark green part is the plunger stopper. The transparent parts are the coil holders, which are hold on both sides with the yellow plastic parts. These absorb the force of the activated coil. 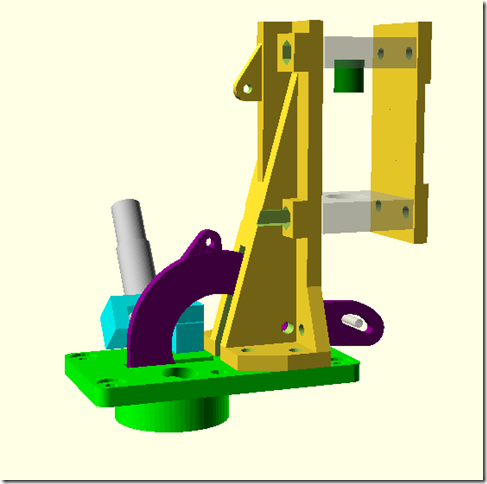 Visible in this view is the contactless sensor in its cyan holder. The yellow parts have several reinforcing ribs to stop the part from bending during activation. Between the purple coil and yellow part is a metal string (not shown) to return the arm to its rest position. 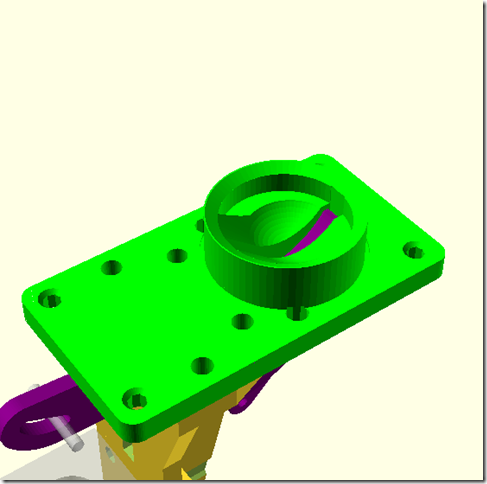 Shield shown from the top in rest. The ball can be captured. 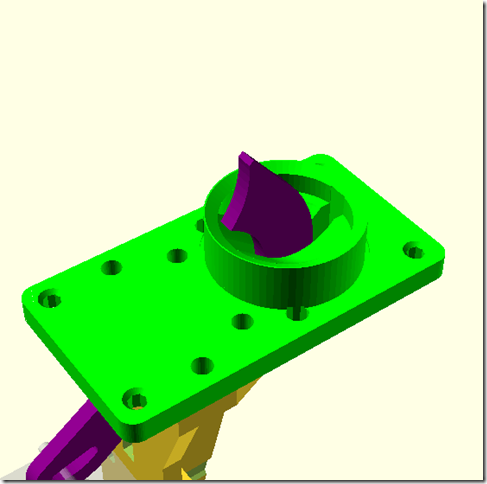 This is the active mode. The ball will be ejected. The rounded of end of the lever aims the ball .

This design is printed, but did not make pictures of it.

eval: the footprint is good, but still could be reduced further. The feed of the coil can be smaller. The eject mechanism works good. It is ejecting the ball nicely. The strength of the arm must be evaluated, it it is thick enough. Also the wear on the arm must be checked. Possible the coil and plunder must be replaced with a 11.11mm plunder and standard coil sleeve, to deduce the scraping resistance between plunger and coil. But during test this did not seem to be an issue.  For some reason the moon shaped opening was misaligned with the plunger after printing. What the cause of that must be checked.