The blog updates are a bit slow. Too much to design...

Targets are switches on a pinball playfield. They detect the ball banging into them and scoring points or special modes. Historically the targets were made with leaf switches. Typical they look like this: 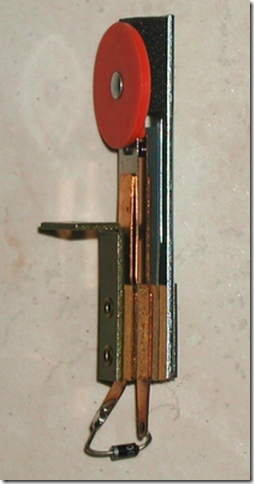 The problem with leaf switches is that the contacts are exposed and will get dirty. They also have no defined contact pressure which is needed for a reliable contact.

I came across this all plastic version, but this was not widely used.  I think it has a microswitch  internally.

Microswitches are better suited for pinball due to the closed housing and a defined minimum contact pressure for reliable contacts.

I looked around for suitable microswitches.

One possible type are larger microswitches with a long metal tab that sticks through the playfield. Sadly, the metal tabs from standard switches are not long enough. Also it is unknown how the long metal tabs will hold up with balls banging into them.

An better approach is to separate the microswitch and the lever functions, like they have done with the plastic targets as shown above.  For this, a small microswitch is needed.

Using the trusted OpenSCAD 3d designer I draw up the following after several iterations. 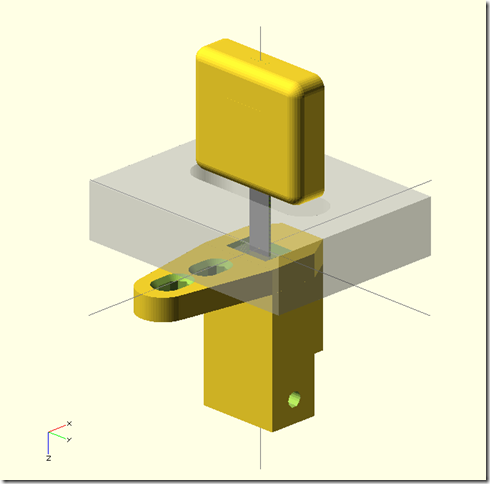 The target and the switch are two separate plastics.They are linked together with a piece of spring steel.  A third plastic part, not visible in this picture, holds the bottom side of the spring.  The spring steel will absorb the forces from the pinball, and return the force back to the ball.

The microswitch only needs one mm travel to make contact, so the target only needs to move a small amount.

The used spring steel is surprisingly strong and resistant to bending.

I have a variant with the screw tab on the front and on the back, depending how much space is available around the target. 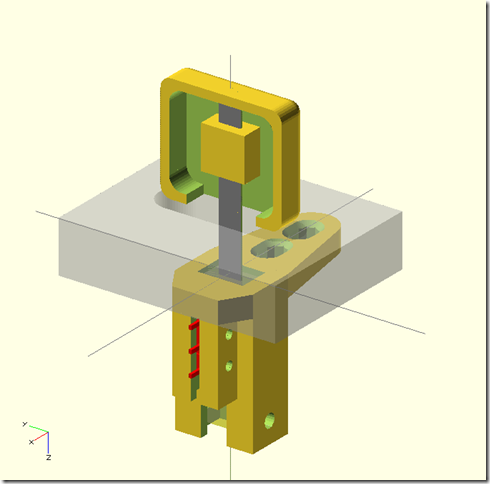 This the is the rear view. The target plastic is hollow to keep it light. In the part below the playfield is the red microswitch just visible.

The piece of plastic inside the below playfield part (shown as transparent grey below the playfield) spreads the force of the ball contact to the plastic, and will not damage or over pressure the switch.

The switch slides in from the bottom, and can optionally be fixed into place using 2 small screws or a piece of wire. Neither is needed, because the switch is being held in place by the surrounding plastic.

To support multiple switches I also drew up a combined switch. I designed a 2,3,and 4 switch version.

The switch sets the distance between the switches, and makes the placement more simple. But  you could also just place the single switches. 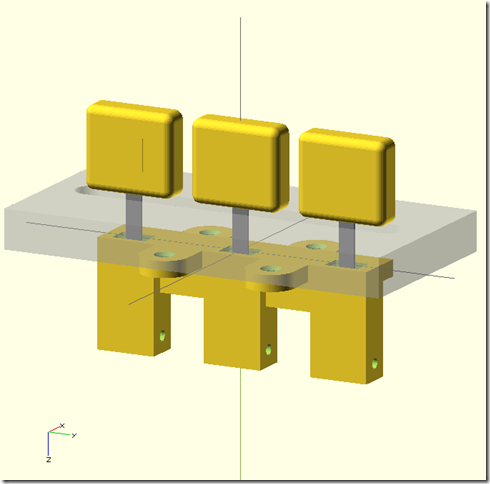 .My trusted Mendel90 3d printer was busy for a while printing the parts in ABS.

The top targets are made of transparent ABS. LEDS really nicely light them up, and I will design a led holder behind them to indicate scores in the future. 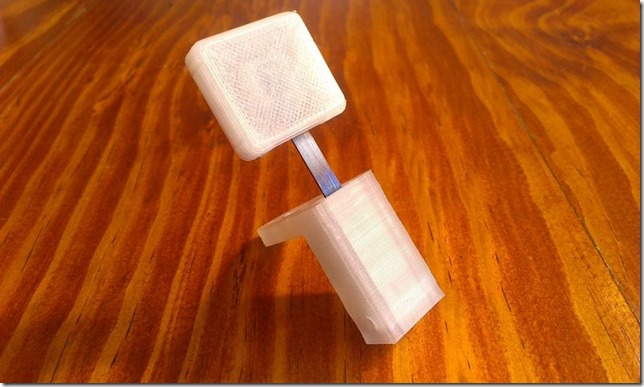 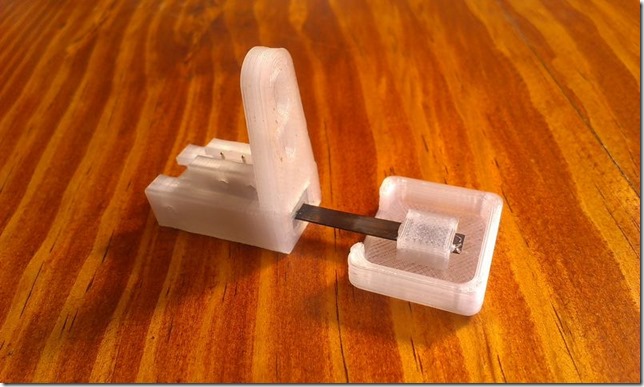 Target switch rear. The tab for the woodscrew does have oval holes. This allows a bit of adjustment to align the target in the playfield hole. The hole in the playfield can be small: 10mm is enough, because the target can be inserted from the top. Also a slit like normal playfield targets  use is also possible. Then you don’t have to re-assemble the target. 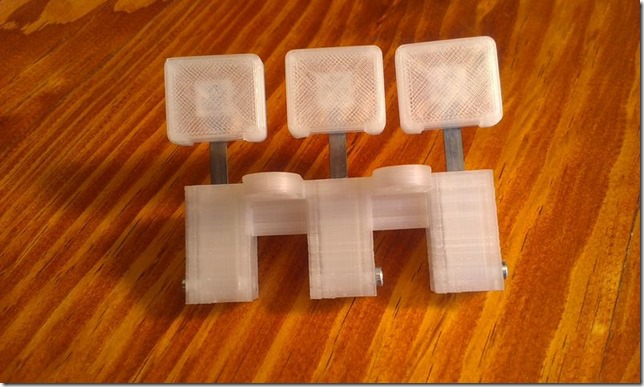 Front of the triple target. 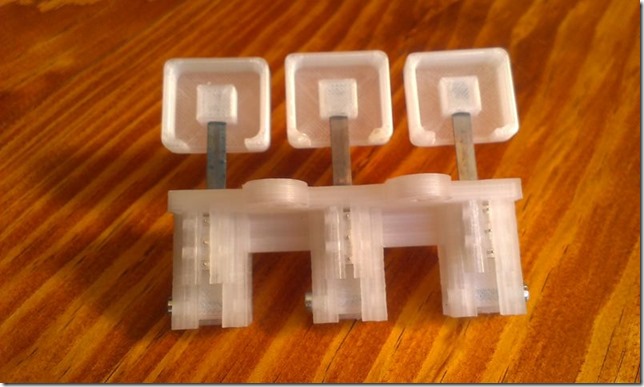 Here you see the back of the targets. The microswitch is just visible as 3 pins in the center. On the bottom screw that holds the target arm in place.

The spring steel is melted into the plastic for a strong connection.

To have all the targets on the same height, I made a small rig. Sadly it is not perfect, and still  I had to move the target a bit. This caused the target in the above picture to be out of alignment. Something to improve later. 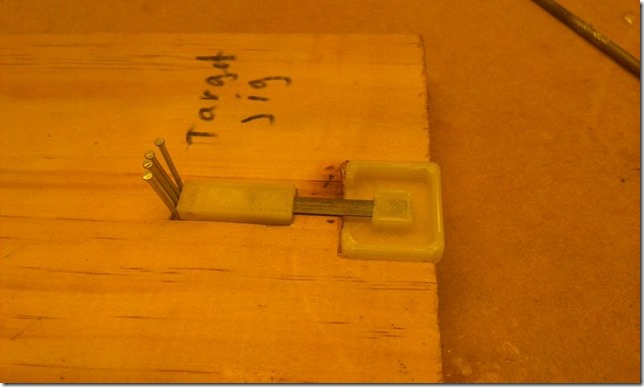 Here you can also see the plastic part that forms the pivot points, and what presses against the microswitch. 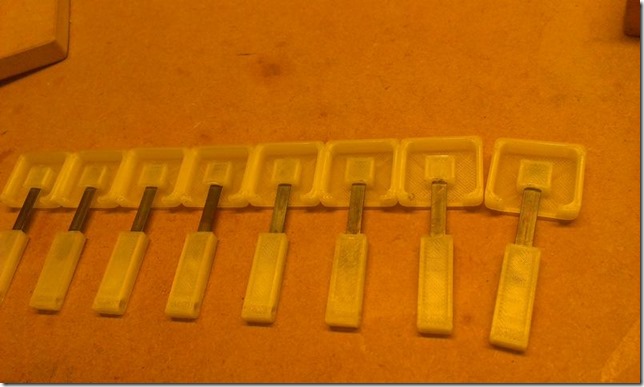 Just made all the targets ( except one)  for the firepower playfield. That last one is a smaller target not made yet. The fit is quite precise, and I did print them on purpose a bit oversize. After a couple of strokes on sandpaper they fit perfectly without much free play.

Till the next update!