This is a overview of my SMD PCB assembly setup.

The PCBs and stencil have arrived back from DirtyPcb. Initial there was a problem with the gerber files I send them. This was caused that the manufacturer could not not process gerber header comments. After switching these off, the files where accepted.

The PCBs are very nice. I was a bit nervous if the via could be made correctly, but those turned out to be no issue. For the via I used a drill size of 0.4mm and via size of 0.7mm. This leaves only a very small annular ring width of 0.15mm (about 6mill). That this is very close to the production limits of the vendor. Any errors in the drill to pad alignment would lead to disconnected via.

You order about 10PCBs. Due to the critical via’s I expected a bit less as 10, but received 12 of them. Nice! Most of the pads have small dimples in them. These are from the electrical test. In a machine two or more flying probes make contact to the various parts of the PCB, and check if the tracks are conducting and have no short to other tracks.

One of the PCB has some strange extra tracks on them. I assume they are cause by junk on the pcb during etching. But they did not seem to be connected to anything, so no real issue.

Interesting is that the manufacturer creates the stencil from the solder mask data not from the paste mask as you would expect. They did a nice job on it too. 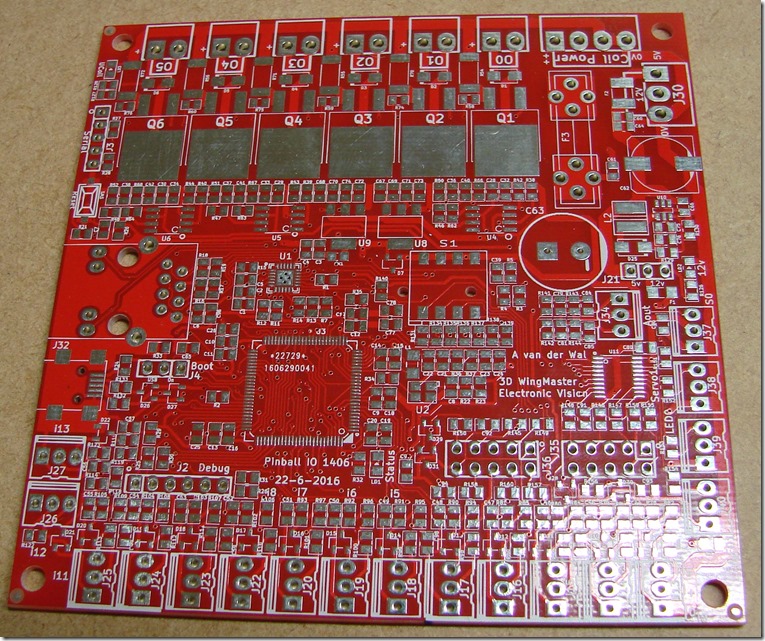 Next challenge was putting the solder paste on the board. There are a couple rather small pads on the board from the QFN and QFP100 packages. So I needed a good alignment between the stencil and the PCB when applying the solder paste. For this I made a small jigg. The two empty PCB boards have the same thickness as the real PCB. They are mounted on a piece of wood, so that the real PCB fits very tight between them. 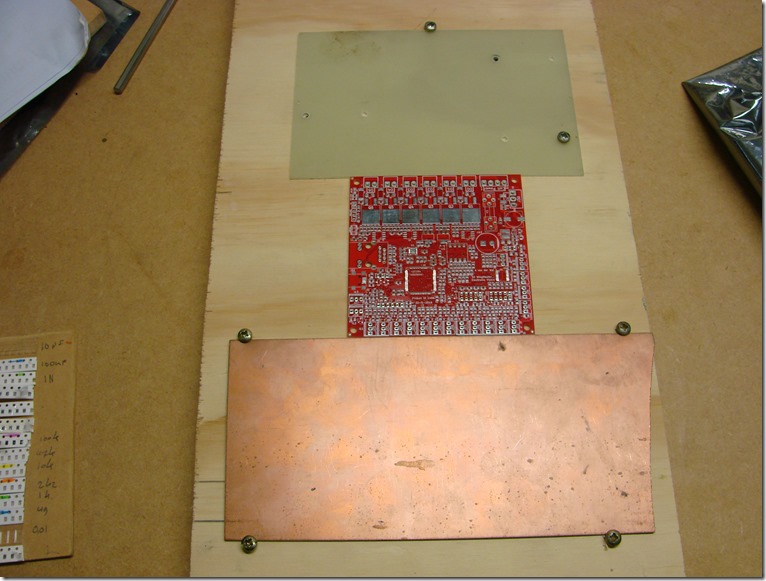 Then I taped the solder paste stencil in place. The stencil is not framed to save on freight cost. It has to be supported during paste application. The top and bottom of the stencill are supported, but sides of the stencil not. This did not seem to create any problems when applying the paste. 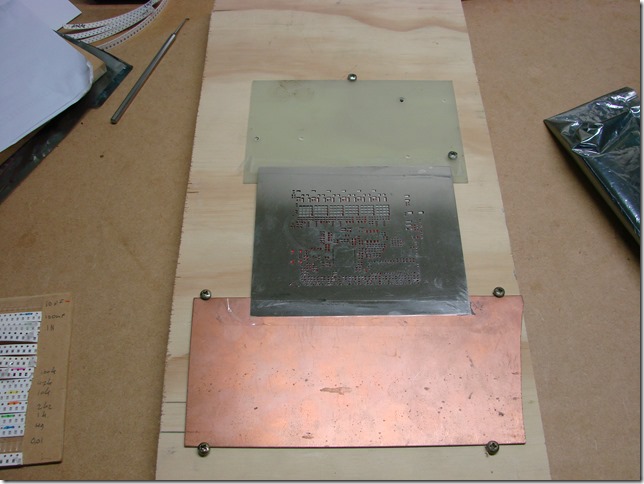 The solder paste used is leaded solder paste. I bought this 1.5 years ago and had stored it in the fridge. The paste has normally a limited self live, because the flux attacks the solder. After testing the paste on a small test board, it looks to still work good, so I went ahead with it. After reading about it, it seems the lead free solder has much shorter shelf live as lead solder. The flux used in lead free is more aggressive and reacts more with the solder as the leaded variant.

I ordered lead solder, because it melts at a lower temperature as lead free. Lead solder melts around 200 degree and lead free around 250.  This is so much closer to the breakdown temperature of the epoxy PCB material, making the reflow solder part is more critical.

The solder paste is first mixed very good and then applied to the bottom of the stencil. I applied the paste with a putty knife of 10cm wide. This worked quite well, but the putty knife was just not wide enough to apply the paste in one go to cover the 10cm wide PCB. On the right side I had to apply it twice. This brought too much paste on that side, but lucky caused no issues during reflow. Next time I will try a stainless steel dough cutter that is much wider. (oops, my wife saw it and was reassigned a new purpose…) 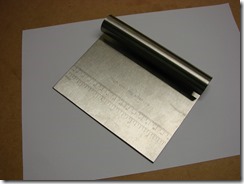 Even with the multiple solder paste application, the deposed paste look very good. I has very happy about that. Applying the paste with a stencil seems to be a very forgiving process. Most of the paste was applied in 2 strokes. The paste was put on the ‘bottom’ side of the mask.The first stroke upwards with little pressure to spread out the solder paste over the board. The second wipe with much more pressure goes  downwards from top to bottom to fill the holes and scrape of the excess paste off. All the excess paste was put back in the box.

After carefully lifting the stencil a very nice paste pattern showed up. 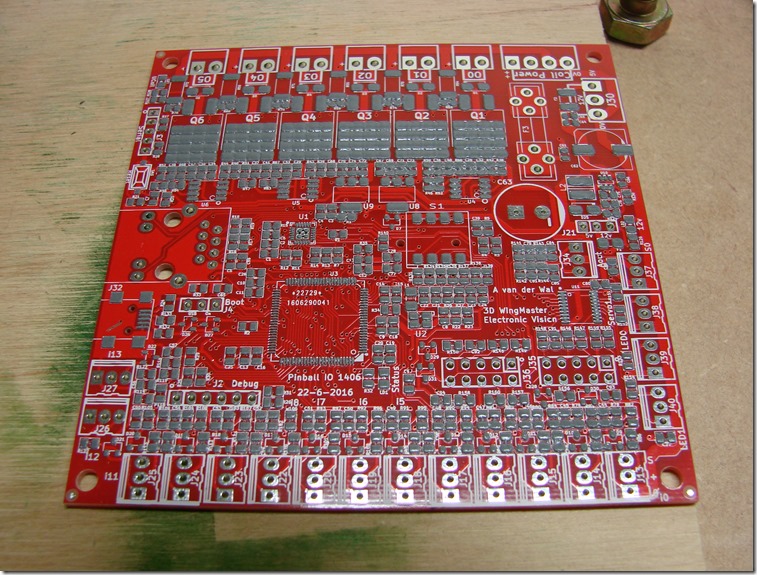 Not bad at all for my first ever solder paste application! Surprising crisp edges of the paste. 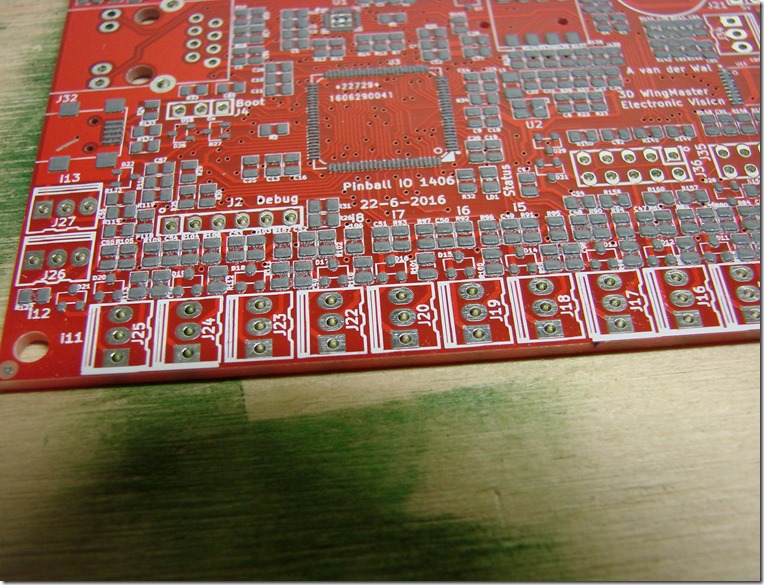 Now the fun part. Placing all these 100 tiny components. I mainly used 0805 parts, so they where no too small.

To help with placement, I marked a component printout with colors indicating the value of the part.  One sheet for the resistors and one for the capacitors needed. 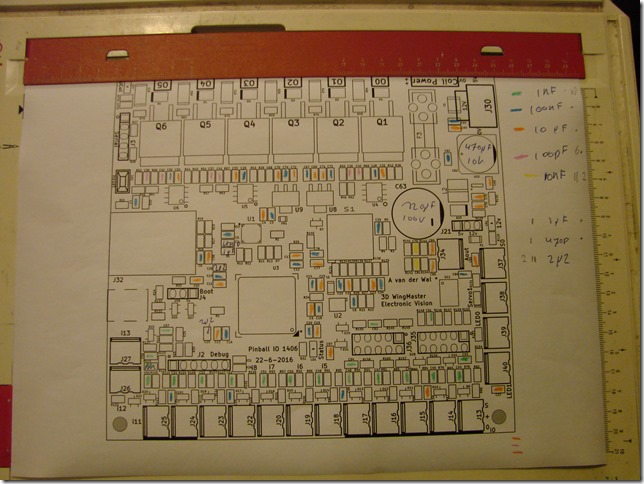 The SMD components I store in envelops in shoe boxes. This creates a very compact storage for a large number of parts. Every envelope I mark some basic information what it is and where is was ordered from.

Most of the parts are ordered through Aliexpress. So much cheaper then distributors like Element14, but you need to wait a bit longer on for the order to arrive. 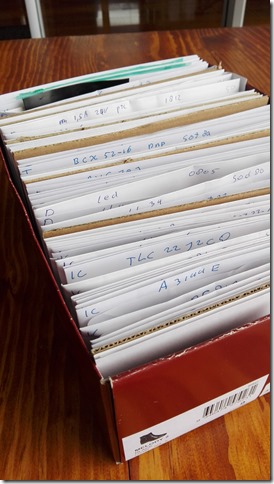 Envelops in shoeboxes are great for storage of the smd parts, but for applying the parts they need to be easier accessible. All the parts that are needed on the pcb in the largest quantities where stuck on a bit of wood with double sided tape. This worked very good. The tape was pulled off easy without letting the parts fly everywhere. I marked the tapes with the same colors as on the placement drawing. 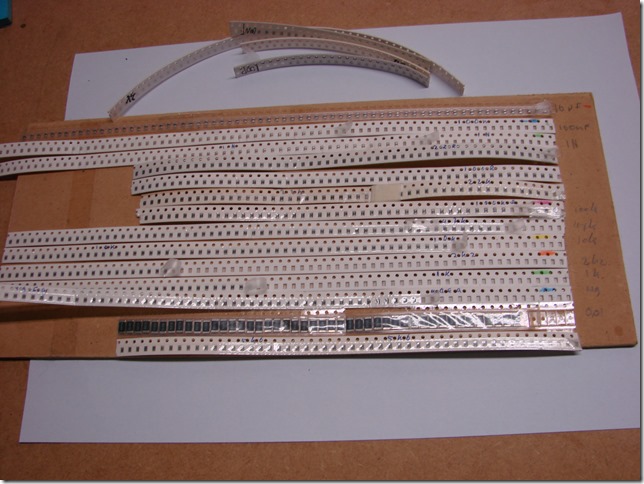 To place the parts I build a vacuum picker from parts laying around.The vacuum pump is a modified air pump (source unknown). I added a tube to the inlet of the pump. A small adjustable voltage regulator (2 transistors and a potmeter) is used to control the speed of the pump.  The pump creates a pulsing vacuum, but that does not seem to matter at all.

I adjusted the pump speed such, that it just picked up the largest parts needed. Even on low speeds it can still pick up a whole qfp100 package on a tiny needle. 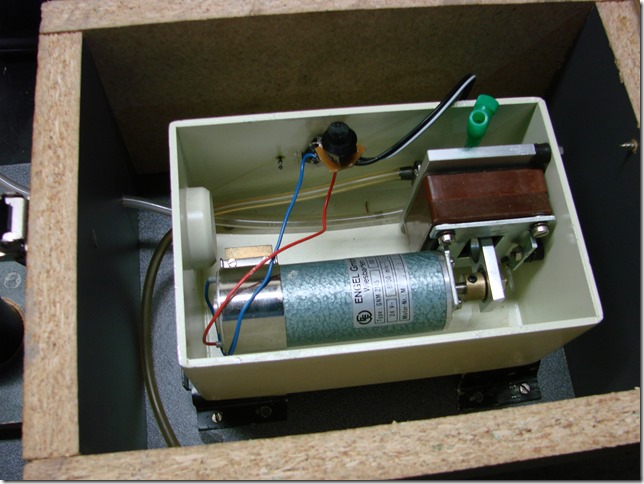 In case a small component was sucked in, I added a film canister to capture them. (that was the last film canister, not all obsolete and now unobtainable). In hindsight quite unnecessary. The vacuum picker needle is too small to suck them in. 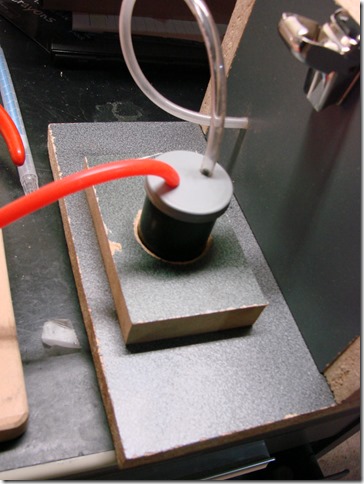 This is the vacuum picker. It is made from a 10 ml syringe. The tip is a standard luewer blunt needle available all over aliexpress. The plunger was cut and drilled so the red hose could be pushed through. The handles on top of the syringe where cut off.

A small hole is drilled in the side of the syringe. Keep it closed with a finger when picking parts up, and opening it to release the part. After placing 10 parts, I found out that you just can keep the the hole closed when placing the smd part in the solder paste. The paste is so sticky that is holds the part better as the picker. So the hole was taped closed. This also helped a lot to orientate the parts, because you don’t need to keep the hole covered. Sometimes the part need to rotate 90 degree or more. If you don’t need to hold the hole close you can roll the syringe between your fingers. An alternative you can also re-orientate the SMD holder, so you don’t need to rotate the syringe. I tried that too, but rotating the syringe is easier and faster.

The red tube is silicon tube. It is very flexible so does not hinders movement.

It did took me about 2.5 hours pick and place all the SMD parts. The 3 pin sot23 are surprising difficult to place. The solder pads are small, and the device has only one correct orientation. I noticed that in the end after about 3 hours the tackiness of the paste had reduced a lot.   I still need to make at least  4 more PCBs, so I hope the next PCB will go faster.

The last parts placed where the QFN and QFP packages.Needed a sturdy hand when placing them! 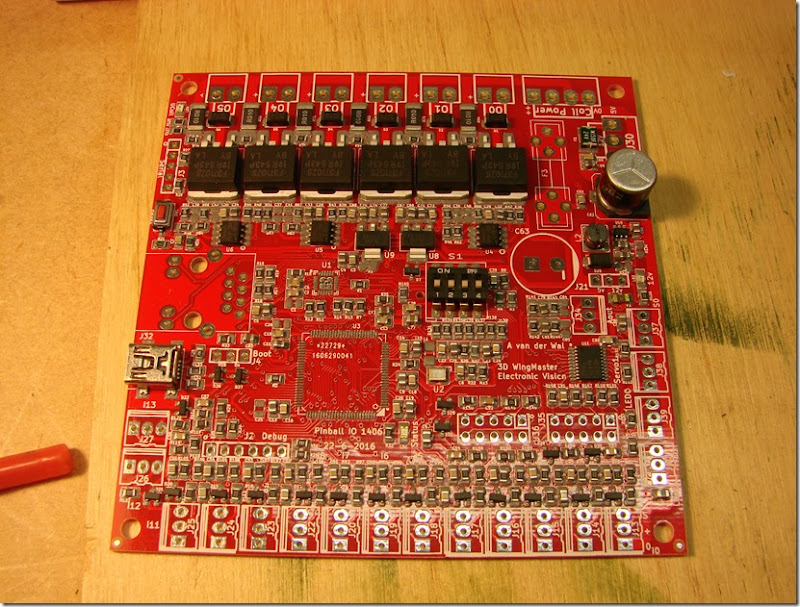 Reflow soldering needs a certain time / temperature profile. In general you should not rise the temperature to fast, otherwise this can cause stresses and cracks in the components. Also you need to hold the temperature steady around 150 degree during 2 minutes to allow for preheating the board and components. After the preheat follows the soldering. The board is heated to 210 degree for 20 sec. with at least 60 sec above 180 to activate the flux.

I experimented a bit how to get close to this solder profile, and came to the following sequence:

- turn oven on (all elements, oven temperature setting on maximum so that it does not cut out)
- oven off when temperature reaches 120 degreeC. The temperature will rise further to about 150 degree
- after 2 min at 150 degree switch heater on again.
- turn heater of at around 210 degree.
- wait 20 sec
- open door partially
- wait  to cooled of below 150 degreeC then open door fully.

It is very interesting to see that all solder paste suddenly goes from mattisch grey to shiny silver solder around 195 degree.

During one test I liked to see how hot the oven could get. I had a small empty PCB in the oven. When the oven reached 300 degree, the PCB started to smoke and smoke. It cost 3 weeks before the awful burned PCB smell was disappeared :-<  I was surprised that the epoxy PCB could not tolerate that temperature. Lesson learned : no more heating  of pcb to 300 degreeC. Still a bit worrisome that for lead free solder the solder profile reaches 250 degree. Quite close to the 300 disintegration temperature.

A very sad lizard with a broken leg is sitting on a warm spot, waiting for the doctor. 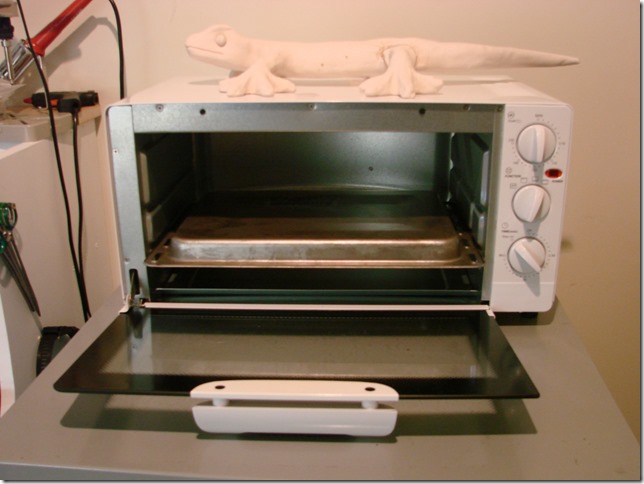 To measure the temperature I used a thermocouple temperature meter. The probe rest on the metal plate close to the PCB. It is winter at the moment in New Zealand, so it was a bit chilly in my hobby room. 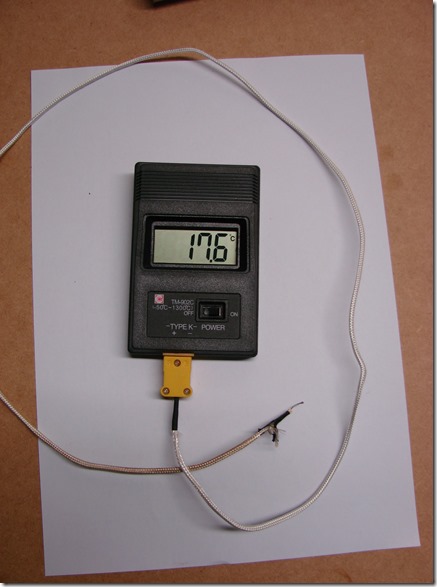 The PCB came out very nice out of the reflow process. I only needed to fix some shorts between the QFP100 package. That one was off halve a pin distance when it was placed in the solder paste, and needed to re-centered on the pads. That caused some solder paste mess that the reflow had not fixed fully..

Added all the through hole connectors, except the RJ45. 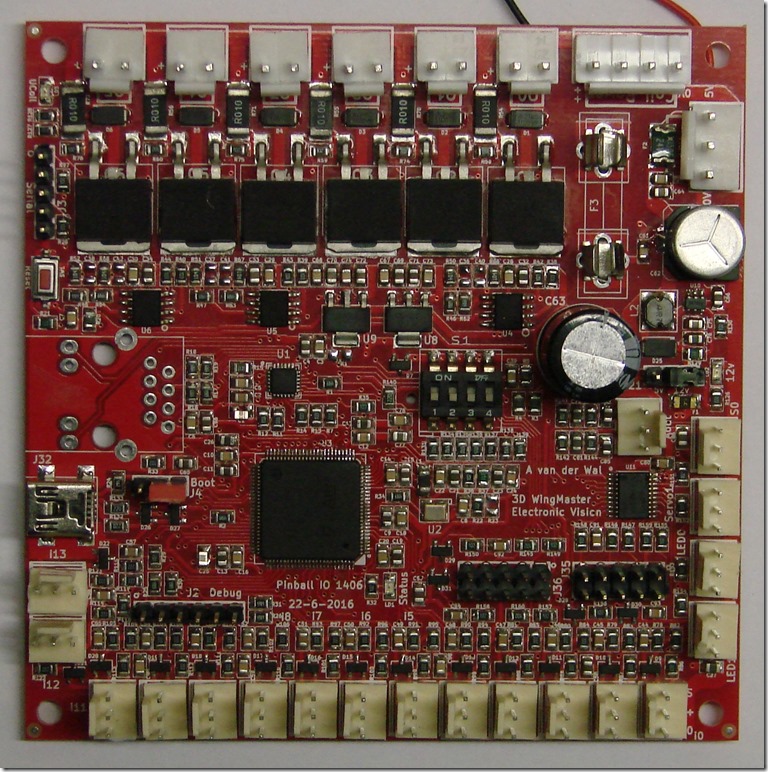 Al in all, I am really happy with the end result. It almost look factory made.  Now I hope it all works.

The DC DC converter creates a nice 11.5v as calculated from 5v rail. The input channels work on 12v and 5v.

Currently still setting up the software build environment to use for CPU testing. Next test is the CPU, power driver and finally the Ethernet.